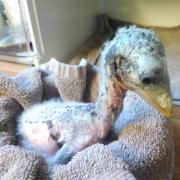 Our bird incubation and rearing unit doubles as winter quarters for our flock of Flamingos, but from spring to autumn a variety of young birds can be seen here. This year it is the temporary home to an extremely special chick; the very first Marabou Stork born at the park! It joins ducklings, Ibis, a Ruppell's Vulture and the first Grey Partridge hatched from eggs laid by our re-introduction project birds.

The Marabou chick has been nick-named 'Lucky' by our keepers, as he really shouldn't be here at all. Back in March, a single abandoned egg was found in the aviary the Marabous share with our Vultures. The egg which clearly wasn't a Vulture egg, was collected and taken to an incubator. The shell was so thick that it proved impossible to use normal tests to see if it was fertile, and no signs of movement or fertility were seen at any stage. So, the egg was left under incubation for a whole week longer than the published incubation period.

A bad egg cannot be left in an incubator without effecting the health of other eggs in the same machine, so it was then decided to discard it. Literally as this was being done, a squeak was heard! - and the egg was saved. The resulting chick, seen in the photo at a week, is now a month old!! - and can now be seen via peep-holes in the mirrored windows of the rearing unit. The internal mirrors help to stop the chicks becoming too humanised, by preventing them from seeing human faces and shapes.

A second Marabou egg is also now under incubation; and this time we are trialing an Egg-Buddy heart monitor, a new device designed to test the viability of difficult eggs.