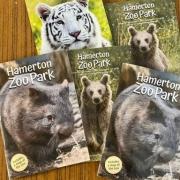 Two brand new books are planned for 2023.
A totally new Zoo Guide-Book is expected for the second half of the year, to coincide with new animals and exhibits introduced over the next few months.
After conversations with the writer and designer, we also have planned the 30th Anniversary book due back in 1990 - but delayed by World events.
As yet untitled, this volume is now in early planning and we hope will be worked on over the winter. It will feature the publications and animals kept at the park over the 30(+) years and will cover many subjects, the highs and lows of our story.
As someone said - it is about time YOU told it...
We are currently collating information, pictures, news stories, scientific publications, anything which might be of interest and might otherwise be missed.
If any readers have anything kept for a reason or accidently found in a drawer, which we could possibly include - we would be delighted to hear.
The print-run will be limited, but at the moment we have not decided by how much.