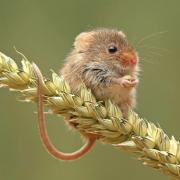 Updated 16 & 20 Feb..
A new project is about to start at Hamerton Zoo Park. Although many of our new animals have traveled many thousands of miles to get here, the next ones are (or should be) very local indeed.

Our area of Cambridgeshire is known as the Huntingdonshire Wolds and is characterised by open arable fields divided by hedgerows and small spinneys, with light woodland in the valleys. The modern appearance of the countryside is the result of intensive agriculture, and historically, small coverts left for fox hunting and pheasant shooting.

The Park now controls over 100 acres of land which has been changed from cereal cropping to long-term hay meadows, cropped annually to provide good quality food for our animals. Further areas of native wild-flower meadow are to be seeded this spring.

Our new project is a feasibility study to collect data prior to a potential re-introduction of two native species which used to occur on our land but no longer do so. Five pairs of Grey Partridges will soon arrive for our conservation project. One pair will move into an on-show aviary in the Park, and the others into secluded separated and off-exhibit breeding pens. The Grey Partridge has suffered a catastrophic decline in numbers of up to 90% in recent decades.

Before this, our first group of Harvest Mice is due to arrive this week. Britain's smallest rodent, this tiny mouse is native to our locality but seems to be no longer seen in our cornfields. Bred regularly here in the past, the first of these new animals will be kept off-show for breeding, and a group will move into a new purpose built exhibit enclosure for the summer.

Update 16-02-2019 - the first group of 10 Harvest Mice have arrived and are settling in to our off-show breeding area.

Update 20-02-2019 - five pairs of Grey Partridges have now arrived at the Parks breeding area, as the first stage of this project. After a mandatory isolation period of a month to comply with BALAI regulations, one pair will be moved into the on-show aviaries - probably housed with our tame female British Jay.