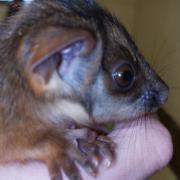 At Hamerton Zoo Park we are the only Zoo in the World to have our three species of 'Ring-tails'.

This common name is given to totally different animals in different countries. The Ring-tailed Lemur from Madagascar is commonly kept in captivity. It is well known, and has bred at Hamerton every year for over 30 years, including 2022.

The North American Cacomistle is a small relative of the common Raccoon and is found across parts of North America. It is sometimes called a Ring-tail because like its larger relative it has a black and white tail. Our male has now settled nicely into one of the new enclosures near to the zoo entrance, and we have just received a mate for him from the Henson Robinson Zoo in Illinois. The pair will be introduced when she has completed her required isolation period.

Our third ring-tail is the Eastern Ringtail Possum from eastern Australia. At Hamerton we have the only individuals of this beautiful small marsupial to be found outside their homeland, and for the first time we are delighted to have a joey. The new baby is now starting to explore outside its mothers pouch and has been confirmed as a little female. We are told that this is the first time the species has bred in Europe, and possibly even the World outside Australia - and would welcome any further information on the subject.
(edit 13 May - apparently the species was bred in the USA some years ago, but the stock has since died out - so this means that the 5 animals now at Hamerton are indeed the only ones outside Australia).