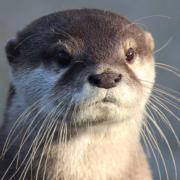 Welcome to our new Otter..

A long planned animal move has just been completed, with our last young female Pudu travelling up to Edinburgh Zoo to be paired with their male under the EEP for this endangered species. Numbers of this tiny deer in zoos are dropping and Hamerton Zoo Park is one of the few zoos in the UK to still be breeding them successfully.
As part of the same move, a young male Asian Short-clawed Otter has arrived at Hamerton from Edinburgh and is now housed in our newly refurbished enclosure, including a new house with viewing into one of the two sleeping dens.
Unfortunately our new otter, who has just left his family group, will have to be single for some time, which was not planned!
A mate was due to arrive earlier in December from another UK zoo, but because of a new Government ban on zoos sending mammals away when they are in bird-flu surveillance zones (which is the case for the female otter) this cannot be done. There appears to be no time-limit to the ban which now includes all 'non-human' zoo mammals as well as birds, so our plans for little otter male are on hold for the moment.