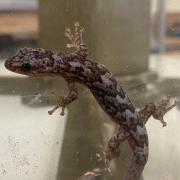 A tiny new arrival back in February adds another Aussie species to our already extensive and important collection - be it totally un-planned this time!

We received an email from some local people who had been holidaying in Perth. On opening their cases back home in Cambridgeshire, a small reptile was discovered. It must have entered whilst they were packing for the flight home.

The Park stepped in and offered it a home. Ben, our reptile keeper, took it under his wing (as it were!) and it is now housed in our education unit.

The tiny lizard was healthy and fit, despite its long journey in the hold of an aeroplane - and is now feeding fine and re-growing its tail which had been shed at some stage in the past.

Research here and in Australia has shown that our new arrival is an Australian Marbled Gecko (Christinus marmoratus), a relatively widespread species in southern Australia, but so far as we can tell unique in Europe - as no other zoo is listed as EVER keeping them.