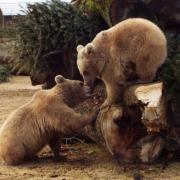 Bears for our Birthday...

In June 2020 at Hamerton Zoo Park we will be celebrating our 30th birthday!

To mark this we have just welcomed some very special new arrivals.

On 15th January three young Syrian Bear cubs made the long road journey from Zoo de Servion in Switzerland. The three cubs are just two years old and have now been moved from their mother, just as would happen in the wild. At this age they would disperse to grow up and their mother would breed again.

The young bears are the first of their kind to be seen in the UK for some years, and have arrived at Hamerton as part of a co-ordinated programme designed to re-establish Syrian Bears in European zoos. This project is being organised by the German zoos in Gotha and Heidelberg. This project is crucial as the Syrian Bear is now extinct in Syria, where war has eliminated any chance of its survival or re-establishment, and only remnant populations are found in adjoining countries. The plan is that the three cubs stay together at Hamerton to grow up, as they would in the wild and once mature the group will be broken up for breeding with new animals due to be imported into Europe from Armenia where they have been rescued.

Our three new babies are already showing their different characters. The two brothers Jaiko and Newton are bold and rather shy respectively, whilst their little sister Laika is nosy and very much the boss.

It has been a big adventure for the three little bears, so to start with they will quarantine and settle in to the smaller enclosure of our new complex which has been developed on the site of of our old Reindeer paddock. This has been worked on over much of the last year. Two outdoor paddocks form the main area – a large, landscaped, grassy meadow with pools, and a smaller rocky area which along with four interconnected dens and a series of race-ways connecting all the parts, is off show. Our visitors will be able to view the whole area from the front, at both ground level and from a raised observation deck. Our new bear complex covers an area of over 6000 square metres in total. The dens and off-show areas have been constructed to allow the addition of a second grassy meadow in the future to make three enclosures in total. This will allow us to move animals into new areas on a rotational basis, and to use the large paddocks for other animals such as our Cheetahs, when the Bears are not in residence.

It is planned to have the new area open for visitors by early summer; we hope for our birthday in June, the Whitsun half-term holidays. Please keep an eye on our web-site and social media pages. We will post updates when we can, plus any details of changes to the plans, and full information on the opening as the date draws closer.