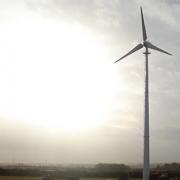 Winter 2019/20 started so early in England, on 21st September it started to rain.. This has been followed by continuously wet and murky conditions. During these couple of months we took the opportunity to have up-grades done to our pair of wind turbines, which involved removal and then replacement of their entire nacelle and blade assemblies.

Although the various storms recently have produced yet more rain, their winds have not been excessive and at last we are now in a bright and breezy period of weather. The turbines are now performing very well and the last 24 hours has seen almost 4000 kWh produced, a record and the highest since they were installed.

At a time when Government is actively opposing alternative energy production, by removing assistance and denying planning permission, we are proud to be actually doing our bit at Hamerton Zoo Park - rather than just talking about it, and paying lip-service to renewable energy.