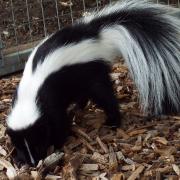 Over the next week or two, the access through the middle of the park leading from the entrance to the centre bird-block, will be closed off. This will not mean that any animals are off show, but will allow the erection of two new enclosures. These will house Striped Skunks and North American Cacomistles. Also known as Ringtails, these small relatives of the Raccoon are rarely seen in zoos. Our resident male from Pueblo Zoo is soon to be joined by a female, also from the USA. This beautiful and little-known animal has a wide variety of common names, some quite confusing. To call it a Ringtail 'cat' or Miner's 'cat' does not help as it is not at all related to any cat species, and just 'Ringtail' is complicated at Hamerton as we also have Ringtail lemurs and Ringtail possums at the Park. For this reason we will use - North American Cacomistle.

We would like to thank our American colleagues for their help and continued patience, during what should have been a simple move done in time for this years breeding season, but has been slowed down many months of bureaucratic delay. Hamerton Zoo Park is very pleased to be the only foreign participant in the American Zoo Association's breeding programme for the Ringtail 'cat' - as they are often known.

This new area is just one of 15 separate building jobs we have on-hand at the moment. None is planned for completion by any particular date, as work is dependent on both the weather and the on-going shortage and cost of building materials. It does mean though, that whenever you visit over the next few months, there will always be something new going on.

The framework for the new skunk and cacomistle aviaries is now in position, and we hope that the access will be open from Tuesday 26th.
Our other works, including the bear viewing platform and new adjacent paddock between the bears and the Malayan tigers is all accessible for our builders, without involving any of our public areas - so all is set for the half-term, which is predicted to be good weather.