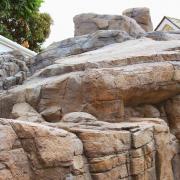 Work is now well underway on the enclosure for our recently arrived pair of Malaysian Tigers. Their outdoor landscaped paddock will cover 3000 square meters, and include a pool and rock-face with waterfall. Covered public viewing and interpretation areas will show details of tiger populations and evolution, information about our animals, and displays showing the conservation work being done by the Malaysian Ministry of Forestry and Tourism. Work will go on over winter, weather permitting, and we hope that this new development will open late by early summer next year. More news will be posted as it progresses.

Several other major projects are also about to start as part of the continuous development of the Park. These will eventually result in major changes to the layout of the Park over the next two years. They involve our current entrance and shops, public services, new roads and paths, our hoof-stock, domestic animals, flamingos, nocturnal animals, animal kitchen, education provision, our train - and welcoming several exciting new species, due to arrive in 2016 - plus we hope, a non-animal related exhibition due to trial for summer 2016. We hope that this will be an interesting addition and, if it is successful and proves popular, it will be expanded and become permanent.