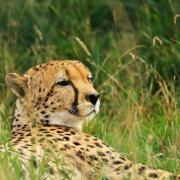 A bumper year for the Park is ending with the recently reported sad news of a major decline in the wild population of one of our most important species; the Cheetah.
It appears from the most recent surveys that the wild population has crashed across all of the Cheetah's range; and now the tiny fragmented populations in the north, in Iran and in Zimbabwe are too small to be sustainable.
At Hamerton we have the largest nucleus of this now formally 'Endangered' cat in the UK, and are currently doubling our accommodation with a further six enclosures currently under construction.
Six Hamerton born Cheetahs have recently left (or are just about to leave) the Park, moving to other zoos - and early in 2017 we are due to receive five new animals of complimentary blood-lines from a major captive-breeding project.
All of this work is funded from taxed income.
It is interesting (and sad) for us that in the light of such important global news, we have received criticism from contributors to our 'Facebook' page who state that all our Cheetahs should be released into the wild and not held in captivity at all. Of course no further detail was given as to how, where, when or why - just the briefest of 'sound-bite' criticism.
We consider such opinion to be ignorant and selfish, and intend to continue our work with increased vigor.
As it appears to be impossible to properly protect wild populations of such a nomadic and sensitive species which spends three-quarters of its life outside protected reserves, the Cheetahs last home will inevitably be in Zoos. We hope that our work, investment and commitment will mean that your children and grand-children will have the chance to see this fantastic cat for real in the flesh, rather than just 'virtually' in a museum, or on a video.