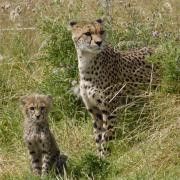 As part of international conservation efforts to raise numbers of this critically endangered cat, we have been involved in the movement of no less than nine Cheetahs in less than one week!

Recent surveys have shown wild Cheetah numbers to have declined by over 85% in recent years in many parts of their range. It is imperative that successful captive-breeding programmes like ours at Hamerton Zoo Park, provide a reserve population in the safety of controlled conditions. To this end we have been planning these moves for well over a year.

Just three days later, four young Cheetahs (3 males and one female) all born at Hamerton made the long but successful flight from London Heathrow via Dubai, to Brisbane in Queensland, Australia, headed to the local Darling Downs Zoo, and to Taronga Western Plains Zoo in Dubbo, and the Hunter Valley Zoo, both in New South Wales. We have just had news that all is well after their flight and the cats are settling down into their temporary quarantine accommodation.