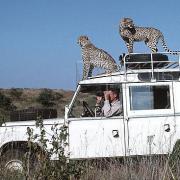 2016 has been the busiest year since the park opened, with several new enclosures completed and others due for completion over the coming winter. 2017 will see the arrival of some exciting new species, which we look forward to covering in more detail as they happen.

North Eastern Plant (who did most of the construction for our new Malaysian Tiger enclosure) are about to start work on a major extension to our Cheetah accommodation. 'Cheetah Country' will cover a total of almost 50,000 square metres, around ten acres and will include 5 new breeding enclosures, plus a 3 acre drive-through area will allow us to take small pre-booked groups into the habitat in a safari Landrover for close contacts and photo-opportunities unrivaled in the UK.