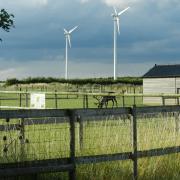 The conservation work undertaken at the Park is currently wholly powered by our renewable energy installations, making us unique in the Zoo World, so far as we can tell. But as developments continue, we will soon tip back to becoming a consumer again. Encouraged by Local and National Government policy, several years ago we applied for two further wind turbines to provide power for future developments. This application was delayed by our local authority, (who had previously been very supportive) and eventually was failed on a couple of very minor points, so we lodged an appeal.
We have just heard that the appeal inspector has dismissed both of the councils points, along with all of the individual comments made by a tiny majority of local objectors - who make up no more than 15% of the local households, a figure which has failed to rise in the many years we have had wind turbines at the Park, despite repeated, concerted campaigns against us and our projects. All of the objections were considered to be 'less than substantial'.
However recent changes by the new Conservative Government have forced the appeal inspector to reject our appeal, despite this. Any local objection means a wind turbine application must now be failed, even it it not material to planning policy, or even if no reason is given at all.
The minority of local objectors in Hamerton have held secret meetings to ensure any neutral or supportive opinion was silenced; selectively invited (and not invited) parishioners to formal parish council meetings; they lodged objections from people who were dead; from people living in London but claiming to be residents' or others who had already sold their house and moved away; made multiple objections in an attempt to bulk out their numbers - often under instruction from local councilors' and with the support of our local MP - and still the percentage of objection did not increase. Some of their number (who oppose the Zoo and our work), attempted to use the campaign as an overt attempt to close the Zoo.
We are fortunate that no-one else took any notice of them, but these are the very people new Conservative Government policy forced the appeal inspector to support, against the majority - it is a very new and interesting form of 'democracy'...
The planning costs for the project, which supported national Government policy and the local county structure plan, has cost the Park £20,000. We will now have to investigate ways of recouping this loss as we cannot afford such a large loss to our conservation work, and look at other forms of income generation which are not linked to visitor foot-fall.