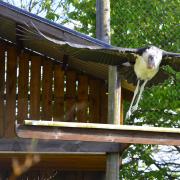 Visitor numbers at the Park have risen significantly during the past couple of years - by around 15% in 2015, and by over 20% so far in 2016. We continue to make considerable investments in new and re-furbished enclosures and public facilities to cope with this extra demand. Development does not come in the form of steady visible progress, and like any building work much is hidden from view. Then suddenly everything seems to happen at once! We are constantly developing, and several exciting new projects which we are currently working on, will come to completion during the 2017 season.

Many of these changes bring with them waves of new challenges. One new phenomenon is the attempted 'Blackmail by TripAdvisor' mentioned in an earlier news item. As our visitor numbers have grown, then so have the tiny number of such incidents, and a couple of recent ones have made us review our policy on such.

Entry to the Park is granted in exchange for an entry fee, as advertised, with various prices and offers available. These give exceptional value, and give the visitor access for the whole day between 10am and 5.30pm. ALL of the animals shown on our web 'Galleries' live at the Park permanently, making our collection very much larger than that held by many similar Zoos; and ALL of the pictures shown in the 'Galleries' were taken here at Hamerton.

Our animal collection is presented in good faith, with every effort made to design enclosures to allow good access and 'viewability' along with the highest possible standards of animal welfare. None of our animals is ever shut out (or in) and forced to exhibit itself against its will, or made to perform 'circus' type tricks for public display. As living organisms ALL have the freedom to live their own lives in their own homes, and we cannot guarantee that every animal will be 'performing' for the fifteen seconds it might take this tiny minority of people to pass its enclosure, without breaking step and dismiss such as 'empty'.

Because everyone has the same access to the Park's animal collection and facilities for their entry fee, unless we have to curtail your visit for some reason outside our control (which is possible, but has never happened in 25 years since we opened) we will not under any circumstances entertain any claims for refunds, financial or otherwise against entry fees - even if these demands are made with threats to publish intentionally poor reviews on TripAdvisor - unless monies are handed over. We consider this attempted blackmail.

It is for this reason that no further 'management responses' will be left on the TripAdvisor system after the end of August 2016, bringing our position into line with that of many larger tourist attractions. TripAdvisor refuses to remove reviewers pictures of animals we don't even keep and taken elsewhere and then posted on our page, and refuses to remove reviews which are blatant attempts at blackmail.

We are very grateful for the large majority of reviewers who have left decent and honest comments, but please do remember that the photographs they publish may be wrong and some poor reviews left may be deliberate fraud - and there is nothing we can to to prevent this, as TripAdvisor appear content to allow it to continue un-checked.