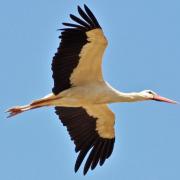 Return of the Stork...

White Storks have been part of the animal collection at Hamerton for almost 30 years and have bred regularly at the Park for most of that time, with chicks being both parent raised and hand-reared.

As the species is now being re-introduced into parts of the UK, we conducted a trial in 2020 by allowing some of our young birds born last year to fly free for the summer.
The species has bred again at Hamerton during 2021 with 2 nests of chicks.

Interestingly - yesterday our resident birds were joined by a wild visitor. This stranger has caused some interest from both our resident animals and our visitors, and you may now be able to see 15 storks here rather than 14!

It looks as though the White Stork is set to make a welcome return to England, including Cambridgeshire!
It is a bold bird and tolerant of humans, even nesting on houses and churches on mainland Europe where it is seen as a good omen and bringer of good luck.
White Storks have the potential to become widespread, as they are not shy breeders like several other bird re-introductions attempted in England - such as the Red Kite, Great Bustard, Common Crane and Corncrake.

The stork mentioned above is now a regular visitor and often seen at the Park; and another interesting bird has just been recorded, only a couple of days ago - when a Great White Egret was seen perched in a tree behind our flamingo pool.