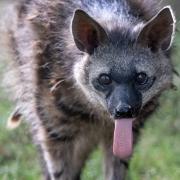 This week has been a difficult one for all of us at Hamerton.
It started and ended with the loss of both of our Aardwolves. This beautiful member of the Hyaena family is so rare in zoos, it has never become established. So few animals have been imported that there has been no real opportunity to develop a captive population.
Our first Southern Aardwolves were captive-born on a private game-ranch in Namibia, from animals originating in South Africa and were imported in 1995. The species has been kept at Hamerton ever since, without break. We bred them in 1999 and hand-reared two pups; and are told that this was the first time the species had bred in the UK and the first time pups had been hand-reared in Europe.
Eastern Aardwolves arrived later. These were the survivors of an ill-fated import undertaken in Kent, and were in very poor condition when they arrived. They were expected to die, but managed to pull through and steadily improved. With no warning or any indication of breeding behaviour they produced a pup in 2015, which was found dead (uninjured, but having never suckled) the next day. Carnivores do sometimes fail with their first breeding attempt, so we were very optimistic for the future, but sadly breeding was never repeated.
Our last two animals, a Southern male and an Eastern female which died this week after quick deterioration of age related problems, were almost 15 years old.

Because both of these Aardwolves were so old, this sad news was not un-expected of course; and part of the responsibility of running a Zoo means we must have plans in place.

We hope that the two enclosures which had been specially built for our Aardwolves will be re-developed later in the year. It is proposed that one will adapted to house a second pair of Chilean Pudu, when our main breeding pair of this tiny deer move in with our Giant Anteater. We have yet another Pudu fawn born this month, a baby male; exciting news as this endangered species is declining across a number of European zoos; making it important for us to expand our breeding programme. Our second Aardwolf enclosure will be combined with the new tortoise house under construction. The indoor section will house Egyptian and Indian Star Tortoises - along with our giant African Spurred Tortoises, with the latter sharing their enlarged outside space with Bat-eared Foxes and Kirk's Dik-Dik, both new species for us, due to arrive later this year.