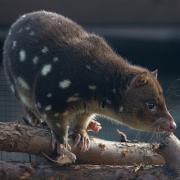 On 10th July 2018 we received two pairs of Tiger Quolls from Queensland, as part of our 'Project-Australia'. The Tiger Quoll is mainland Australia's largest surviving native carnivore. Even though it is sometimes called the 'native cat', it is a marsupial and about as different as it is possible to get! We are told that our Quolls are the first to be seen in Britain for almost 60 years, some say even 150 years - we do know that they are the only animals of their species outside Australia.

Quoll numbers have plummeted in the wild due to habitat loss and competition with introduced predators such as foxes and cats. Captive breeding programmes are being established and we are delighted to be able to work with several Australian zoos on this project, under the formal approval of the Australian Government.

Our new Tiger Quolls are housed in the purpose built block of interconnecting indoor rooms and outdoor enclosures built specially for them last year. The Quolls can often be seen sunning themselves in the two public exhibits. For the moment their indoor rooms with viewing windows, are screened off for privacy - but we hope the screens can come down soon, once the animals have settled in. This block of enclosures can be found in the middle of the Park near to the Cockatoos and Parma Wallabies.