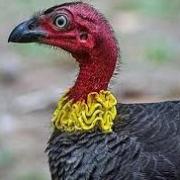 The Bird that thinks it's a Crocodile...

New arrivals at Hamerton Zoo Park are two pairs of Australian Scrub Turkeys. One pair is now on display sharing its aviary with Long-nosed Potoroos, tiny Kangaroos only the size of a rabbit - and the others will follow in a couple of weeks. Also known as the Brush Turkey, or Incubator Bird, these strange birds are the only ones in the UK. Although they look a little like them, they are not Turkeys at all; but are part of a unique family of birds called 'Megapodes' only found in Australia and parts of Polynesia. Just like Crocodiles and Turtles, they do not incubate their eggs themselves like all other birds, but build a large compost heap of decaying vegetation to act as an incubator. Their chicks, like baby Crocs, are independent as soon as they hatch. Our birds are still young and rather shy after their transport and quarantine, but we hope that once they are settled in they should be as bold as those seen around Australian picnic areas, and in suburban parks and gardens.

Both pairs of Scrub Turkeys are now out in the main aviaries. The first male has been a very busy boy over the past week or so, and has started to construct his first incubator mound - shown on the banner header on our 'Home' page. A nest chamber has been made in the top and he is now displaying to the female to attract her to it. They are not really expected to be old enough to breed until next year, but this is certainly a very promising start...!