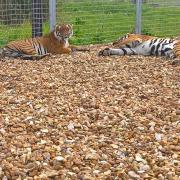 Our Malayan Tigers are being introduced to each other. This has been carefully planned now that both animals are completely settled into their new enclosure.

Putting potential partners together is not without dangers and they have been carefully monitored since their arrival. They have been able to see each other, smell, and interact through the wire and all signs have been very promising!

Their first introduction was made today, now that it is quieter after the school holidays with less disturbance. The pair were allowed together for the first time in the off show enclosures. A few cuts and bruises and a lot of noise were exactly as expected, and we are very happy with how it went. We plan to repeat this daily, splitting the cats up again for feeding and overnight - and hope that things will progress over the next week.