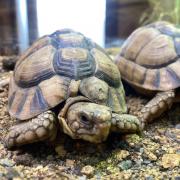 Our reptile house has welcomed some tiny new inhabitants.
The group of Blue Spiny Lizards received last year have babies being reared at Hamerton Zoo Park for the first time. In the wild this lizard is found in the southern United States and Central America.
A new species has also arrived; the tiny Egyptian Tortoise is a critically endangered reptile, now extinct in Egypt and only found in a couple of restricted locations in neighbouring Libya. Viable populations are now only found in captivity, and this is one of an increasing number of species which have been saved by Zoos and other conservation centres. It is one of the Worlds smallest tortoises, and our two new animals are living in the reptile house for the moment.
Along with several others, both of these species are destined for a new exhibit planned to open at Hamerton towards the end of next year.