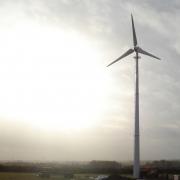 Early December 2015 saw the third anniversary of the installation of our two Endurance Wind Turbines at Hamerton Zoo Park, and the hitting (and passing!) of a notable target. In these three years our two machines have generated just over one million kilowatt-hours (> 1,000,000 kWh) of electricity. This is enough for the annual requirements of more than 300 houses, and off-sets the annual carbon emissions of 130 cars.

Our turbines transmit continuous real-time data on their status and performance, and we now have three years of performance figures recorded. Anti wind-turbine campaigners often have hidden agendas, and repeat miss-information in an attempt to justify their position. We refute all their claims that modern turbines are inefficient, noisy, unreliable, ugly and not cost effective - and have the installation and figures to prove it.

Onshore wind remains the most economic way to produce electricity in the UK, and also in Germany. Building the same machines off-shore trebles the cost of every kilowatt of electricity produced. Onshore, erection and installation are quick and straight-forward, and the little maintenance needed can be done rapidly and as required by a couple of men in a van, so 'down-time' is minimal.

Coal and gas-fired power stations are one and a half times as expensive as on-shore wind, even before imminent EU fines are raised on these industries because of their high carbon emissions. Lies to the contrary, from the media and anti wind-turbine campaigners, have been accepted by some of the public who appear to believe that they are unfairly subsidizing renewables. The new UK Government has been influenced by these lobbyists and has just slashed renewable investment from 2016 in favour of shale-gas extraction in the home counties, funded by the lobbying power of the oil industry. This leaves the UK isolated, and now out of step with most of the developed World in its efforts to combat climate change.

Even on our modest site with small turbines in lowland England, we can do far more than our share - when many others just talk about and pay lip-service to, the issues of global warming.

Despite this negative political pressure and the local objections of a tiny minority, we will continue our fight for two more turbines. We have proved that our equipment is reliable and effective, and our site is suitable and produces good results. We are convinced that the next generation will thank us for our foresight and the legacy we leave them.